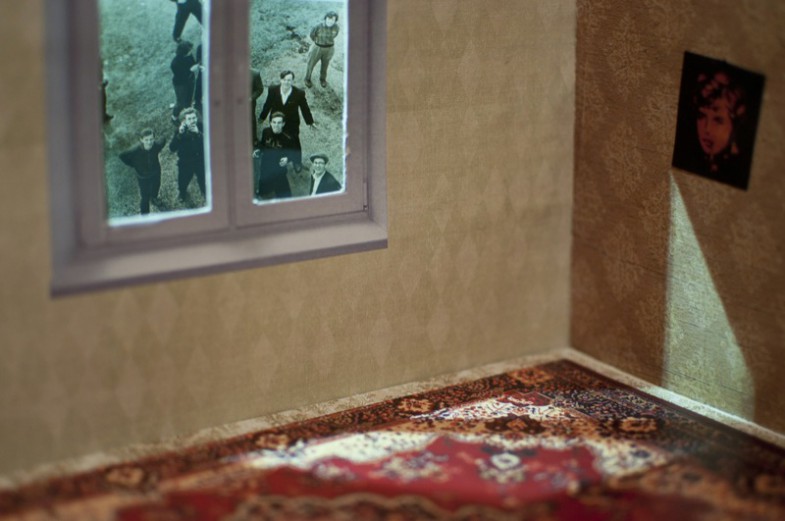 In my project I refer to the concept of home. “Dom” means a house, home, building in the Russian language.

What the image will be always depends on the topic that I explore. Listening to myself, I find
something that resonates in me, some images and I start working on their visualization. I invent what I want to photograph and then I just create the image.

Working on this project I had myself to create objects for my shooting, to see them sculpturally, to do the installation. As a model for creation of the maquette of houses, I chose the particular type of masshousing. These homes I decided to remove from their usual context and put in some kind of scenery to create theatrical illusions, to make a collage of the real and the imaginary life, where model of the house becomes the embodiment of reality and the real landscape is transformed into the theater sets.

Further I planted flowers in the makets and I’m watching as they are germinating. I’m photographing this process, thinking about how our concept of home is changing over time and how it is transforming in connection with the place in which we live. In the next part of this project I felt the need to dive from the outside into the interior space and not only in the space of “Home”, but also in the memory. I wanted to cross the threshold of my associations, so I designed some sort of interior, I built decorations from cardboard, which were immediately destroyed after I did a photo. Creating images for me is a kind of game, an attempt to create a non-existent reality. A photographic medium is never enough for me, I always feel the need to expand its borders, to move beyond the bounds of standard receiving of the photographic image.

So I invent new ways, new language, which I can speak, making my experiences of a certain
theme visible to the viewer. The project “DOM” won the first place in the competition “The Baltic Photo Biennale. Photomania” in the Fine Art category, and was represented at the group exhibition in the International festival of photo art in Kaliningrad, Russia in August 2013, in the “Taiga Space,” St. Petersburg, 2013, at the Exhibition ‘Look into it’, Moscow, 2014.

Julia Borissova completes every her project in a book format. The book «The Farther Shore» was presented at open-air exhibition in Noorderlicht Festival’ 2013 in the Netherlands. The same year this book entered the short-list of the international photobook festival in Kassel (Germany). «Running to the edge», another Julia’s completed project, was exhibited in 2012 at FotoDepartament Gallery and later, in April 2014, Julia released it in 2 book versions — open and limited edition.

Her new project «DOM (Document Object Model)» has just started it way. The first, trial part of the project was presented in the one-day insulation in «Taiga» space after the workshop of Dutch photographer Anouk Kruithof in 2013. Then, in 2014, the project took part in the group exhibition «Look into her», which was a part of X International Photobiennale in Moscow. Also one part of the project was published for the first time in the «Iskusstvo» magazine («Art» magazine) in N1 (588) 2014, which was fully devoted to the photography.

From 31th May to 27th June FotoDepartament presents the full version of Julia Borissova project «DOM ((Document Object Model)» in the gallery.