How was it? Photobook Day in FotoDepartament 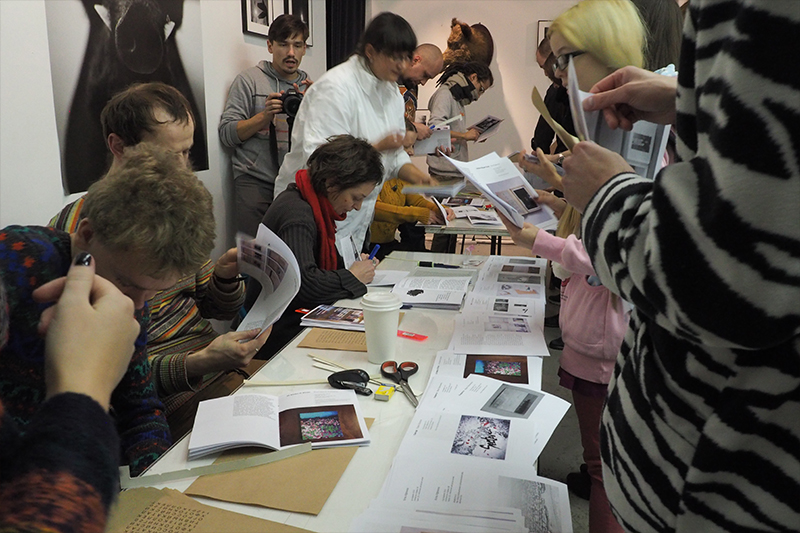 On 27 of December 2014 we had a Photobook Day in the FotoDepartament gallery. The main event of this small festival became a master-class in which all participants could make a collective catalog of new Russian photobooks with their own hands and take it for free.

To make this possible 35 photographers and artists designed and printed pages about their works and also wrote their thoughts about photobooks in general: why do they collect and produce them and what do we need in Russia to establish local photobook market. By 27 of December all pages from several different Russian cities arrived at FotoDepartament. During the master-class more than 50 people were able to sew all these pages together and fasten it with a special loop. Guests continued to sew even when this master-class was officially over.

Master-class was held with the support of Expert Photobook Review, whose founders presented their YouTube-channel and answered some difficult questions from the audience. After that Ksenia Yurkova, Lena Kholkina, Natalya Reznik, Nadia Ishkinyaeva and Arthur Bondar presented their band new or coming in 2015 photobooks.

The small festival in FotoDepartament ended up with discussion about the market of photobooks in Russia, the organizers called it “the Square table” because of the sharpness of the questions that were raised during the evening. Moderator (photographer Jana Romanova) and participants (designer and photographer Anton Lepashov, PR-director of “Print Gallery” Vladimir Semyonov, artist and photographer Elena Kholkina, designer and photographer Ksenia Diodorova and freelance researcher, photographer and curator Daria Tuminas) shared their views on the whether there is a market of photobooks in general, is it a “closed” one or opened to different audiences, whether it should be separated from the photography market, do we need it in Russia and how to establish it, who is the target audience of photobooks and how to promote them.

The discussion was held with the active participation of the audience and outlined several key and divergent issues that resonated with the texts of the collective catalog. Despite the fact that many of these issues one way or another occur in private discussions, a joint meeting of the different points of view of specialists who’s involved in the production and distribution of books was refreshingly helpful and FotoDepartament plans to continue in the future a series of similar discussions.