The book “Be Happy” made by Russian photographer Igor Samolet was included to A DIY Photobook Manual and Manifesto published by Self Publish, Be Happy and Aperture foundation. This autumn another project by Igor Samolet called “Herbarium” was exhibited in FotoDepartament gallery (17.10 – 26.11.2015)

Read more about A DIY Photobook Manual and Manifesto: http://shop.selfpublishbehappy.com/product/self-publish-be-happy-a-manifesto-and-diy-manual-to-self-publishing-photobooks-by-bruno-ceschel

Stories made by the graduates from the educational program FotoDepartament.Institute for takiedela.ru – the website created by the charity foundation “Help Needed”

Photographer Tatiana Vinogradova made a portrait of the only place in Russia where adolescents who have broken the law have the opportunity to live and study outside their habitual environment – the streets, the school and their family. See full article:  http://takiedela.ru/2015/10/svyatoy-vasiliy/

Another documentary project by Ksenia Ivanova called “On the Edge” represents the life of modern subcultures in St. Petersburg and was created during the author’s studies in FotoDepartment.Institute. The project was published by “Kommersant” newspaper complimenting the interview with sociologist Elena Omelchenko. See more: http://www.kommersant.ru/doc/2834824

The interview with photographer Anastasia Markelova about her recent work “Please, return” was published on Bird in Flight website. Here Markelova tells the story of the archive she discovered two years ago on Sri-Lanka. This encounter led to a long and fascinating investigation of the origins of this archive. The story of the family that owned these photographs appeared to be closely connected to the history of photography itself.

The documentary series by photographer Kristina Syrchikova, who graduated from FotoDepartament.Institute educational program, “Funeral Dress” was published on Bird in Flight website. The work is dedicated to a close friend of the photographer’s family, an elderly woman suffering from cancer. Kristina Syrchikova: “I wanted to make people pay attention to those who suffer from cancer. To make them see pain, hope, humility and loss of faith; to face the merciless medical system. I hope that my work would bring relief to the pain of the people who are in same situation. I hope that they can find the power not to give up and support each other. These series is a revelation and an attempt to turn the wound inside out. This is painful, but also nessesary.”

The series “Mzensk” by Anastasia Tsayder, photographer represented by FotoDepartament gallery, was included in the long list of nomenees for Kandinsky Prize 2015 in “Young Artist. Project of the Year” categorie.  The first exhibition of this series happened in 2014 in FotoDepartment gallery. 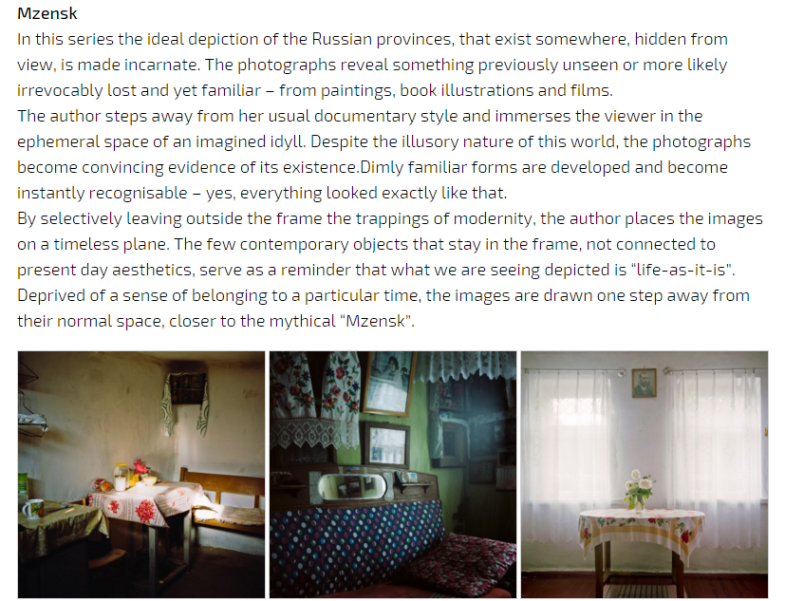 Another project by Anastasia Tsayder, “Summer Olympics” was published on the website of Wired magazine. “[I wanted] to tell a story about the hopes for a utopian future encapsulated in this architecture,” the photographer says, “and about how far from reality these expectations turned out to be in the end.” 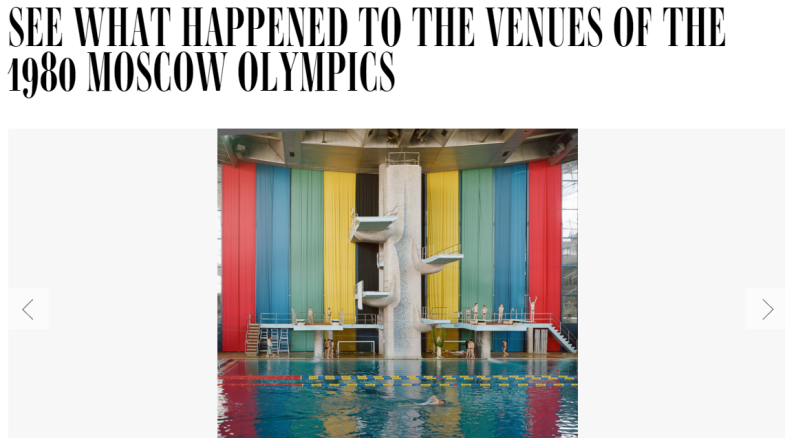 During the 6th Moscow Biennale of Contemporary Art photographer Elena Kholkina, represented by FotoDepartament gallery, in 10 days created a project “Dreams of the Center Pavilion“. Using photography, found images and a projector she made a book from the material collected during these 10 days in Biennale. See more: http://moscowbiennale.syg.ma/sny-tsientralnogho-pavilona 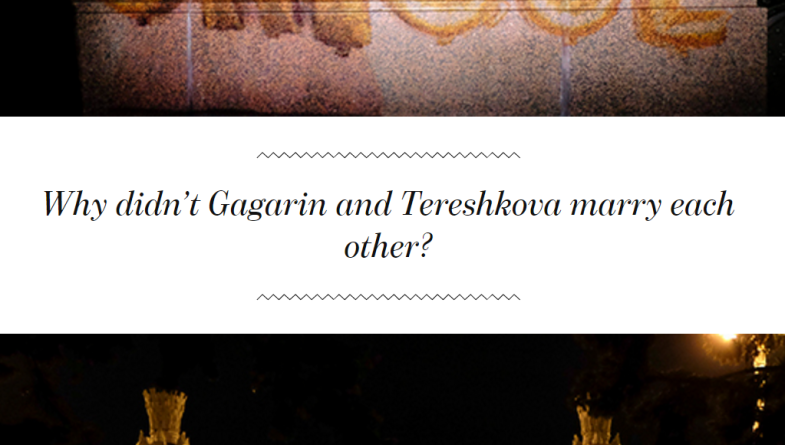 The dummy of Elena Kholkina new photobook “Reciprocity” was listed in a short-list of  Spine Photobook Festival 2015 Dummy Award.

The book “DOM” by FotoDepartment gallery photographer Julia Borissova was included among 20 other books to the BOOKCORNER of Internetional festival FOTOGRAFIA in Museum of Contemporary Art in Rome.

Ropmagazine website published another series by Julia “The House of The Sea Wind“. See the full article: http://www.r0pmagazine.com/the-house-of-the-sea-wind-julia-borissova/

Two projects by photographer Jana Romanova – “The Alphabet of Shared Words” and “Waiting” –  took part in the Month of Photography in Minsk this October.

“Waiting” was published in the form of a photobook and was presented in Ping Pong: 30 Young photobooks vs. 30 Classics exhibition in Paris. Musee Magazine published a long review of the book and British photographer Martin Parr included “Waiting” into his list of the best photobooks in 2015.

The book “Waiting” is available in FotoDepartment online store. 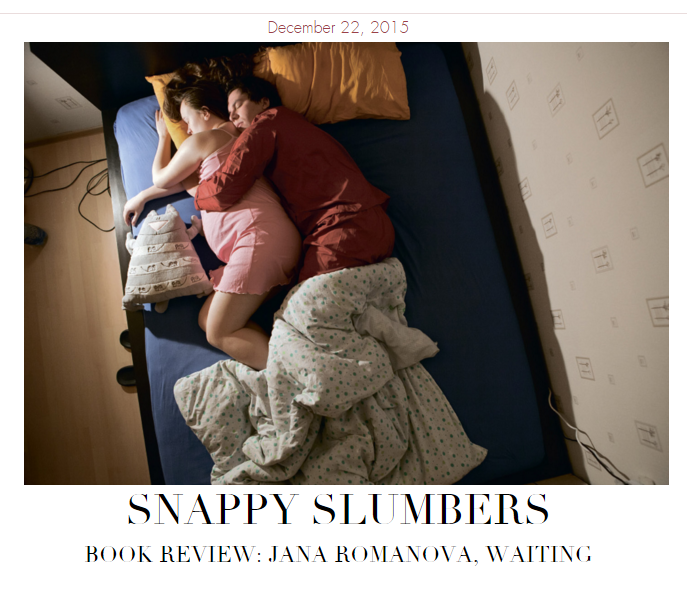 When Jana Romanova was selecting the best photobook in 2015 for FKmagazine herself she selected the work by FotoDeartament.Institute graduate Yury Gudkov “Keep an eye on what you see“. This book is also available in FotoDepartament online store.

The project by the student of FotoDepartament.Institute Andrey Ivanov called “Urban scrawl” was published by The Calvert Journal and The Guardian.

The project “New Territories” by FotoDepatment gallery photographer Fedor Shklyaruk was published on the website of Thisispaper magazine. See the full article: http://thisispaper.com/fedor-shklyaruk-new-territory/

Special publication on the website of  YET magazine was dedicated to the students of ISSP summer school in Latvia. There are also the works by Michail Novitsky and Alexandra Soldatova.