Fyodor Telkov’s project at The Ural Industrial Biennial / “The blood of heroes/Алания, Завет” series at the festival “Photoparade in Uglich”

The ongoing series includes photos of Ural’s natural and industrial sceneries created in Sergey Proskudin-Gorsky’s original technique, designed 100 years ago. During The 4th Ural Industrial Biennial of Contemporary Art, which will take place in this autumn, 60 prints from the series will be showed. This project is a collaboration of Fyodor and curator Zhenya Chaika.

Fyodor’s shots «From the project The blood of heroes/Алания. Завет» took the third place in the competition “Point on the map” during XI International Festival of Photography “Photoparad in Uglich”. 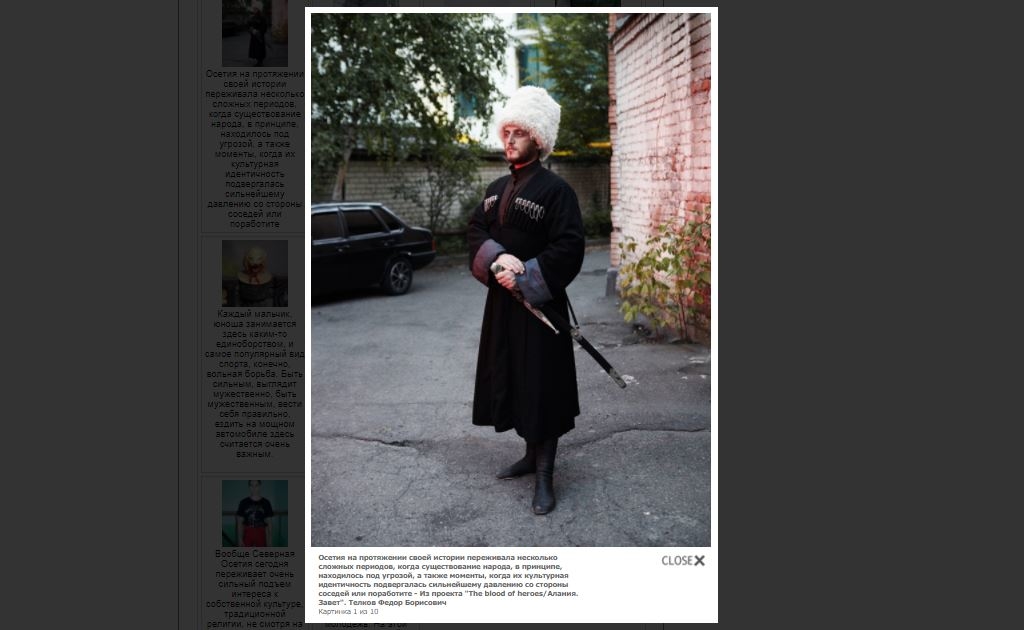 In March 2017 Natalia Reznik‘s project on daughter’s striving to recreate memory about the lost parent “Looking For My Father” was exhibited at Saratov’s IMHO Gallery. In summer from 1 to 25 June the series was shown at Fabrica CCI in Moscow. 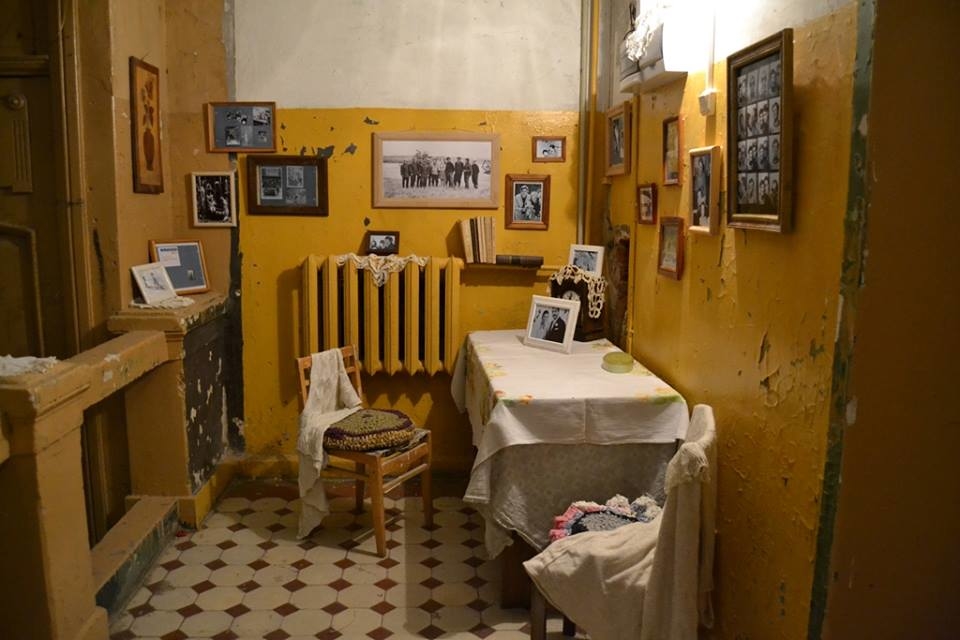 Buy “Looking For My Father” book

From 6 to 28 May during the festival The Boutographies – Rencontres Photographiques de Montpellier dedicated to young European photography, Alexandra Soldatova‘s series Green Channel became one of 18 projections, exclusively selected by curators for expositions’ program. 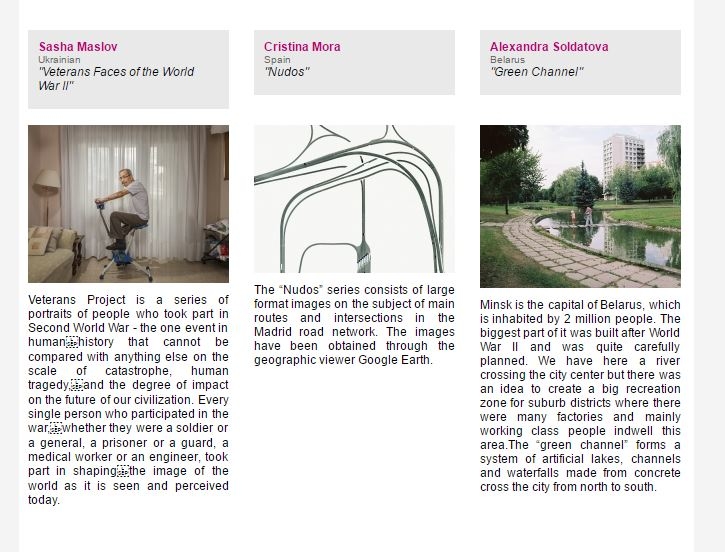 Buy Alexandra Soldatova’s prints and postcards “Must Be Beautiful”

Aroundart.org tells about FotoDepartament Gallery’s author Igor Samolet‘s exhibition called “Breakfast for Artem”, which was held at Moscow’s Manege from 1 April to 9 May during Fashion and Style in Photography 2017.

At The Center of Cultural Initiatives “Ugor” from 20 May to 30 June Igor’s solo exhibition «Sophisticated hugs» was presenting his newest works. Exposition involved 4 projects, based on Igor’s expeditions to Norway, Pre-Polar Ural, Archangelsk’s forests and Kozlovka village in Komi. 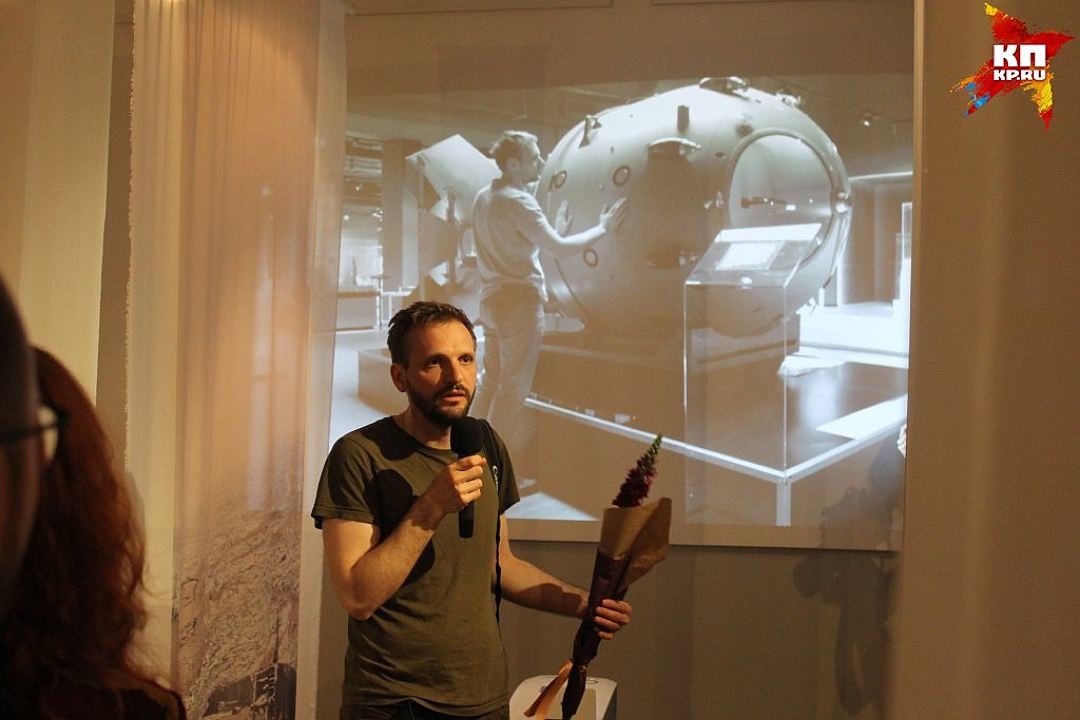 Julia Borissova‘s first museum solo exhibition was held at “Metenkov’s House” in Ekaterinburg this summer. Exposition “Running to the Edge” included 5 projects, built into infinite poetic narrative about nature of memory. The exhibition was curated by an artist, curator and photobooks collector Anastasia Bogomolova. Aroundart published a review on Julia’s fantastic show.

Julia Borissova’s book DOM took part in “Books to play with” show, which took place in Lodz, Poland this June. 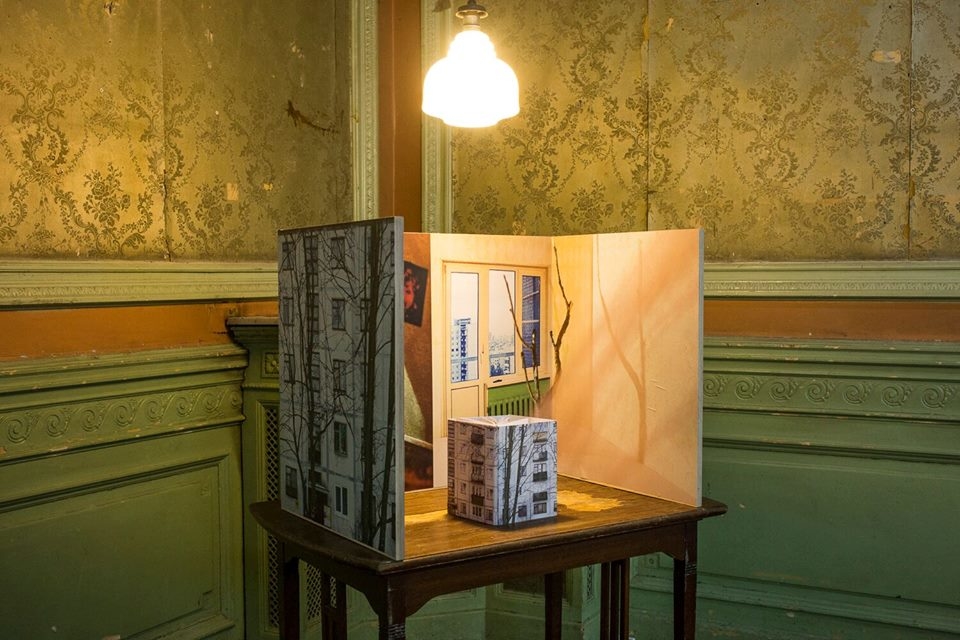 Julia Borissova’s book “Dimitry” about Russian Tsarevich was presented at a r c h i p e l a g o at Tate Modern in May and also got to the finals of Athens Photo Festival. 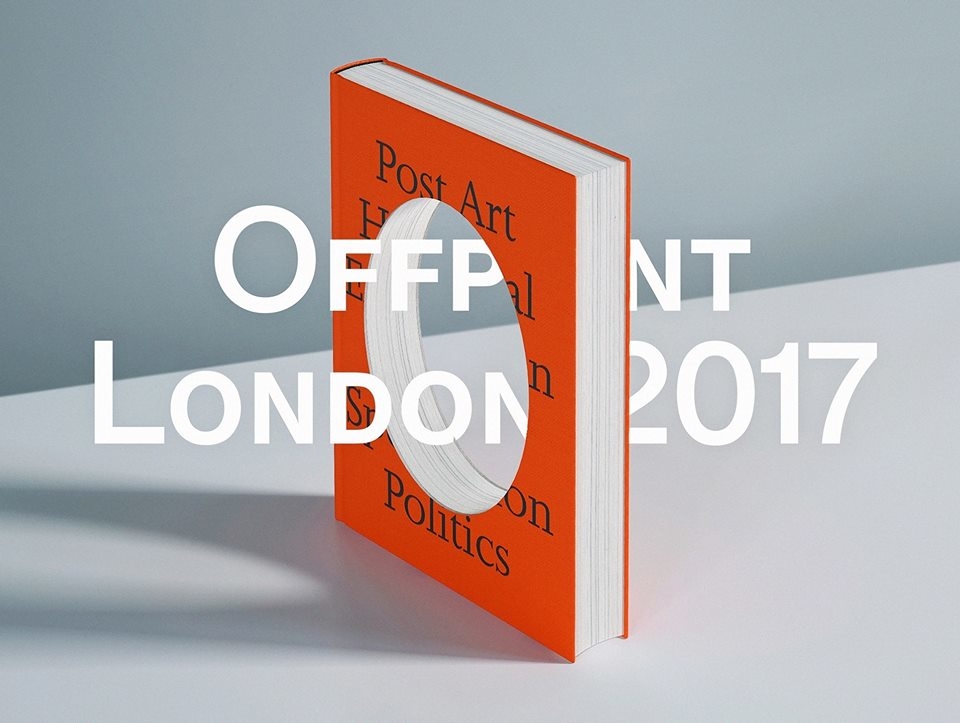 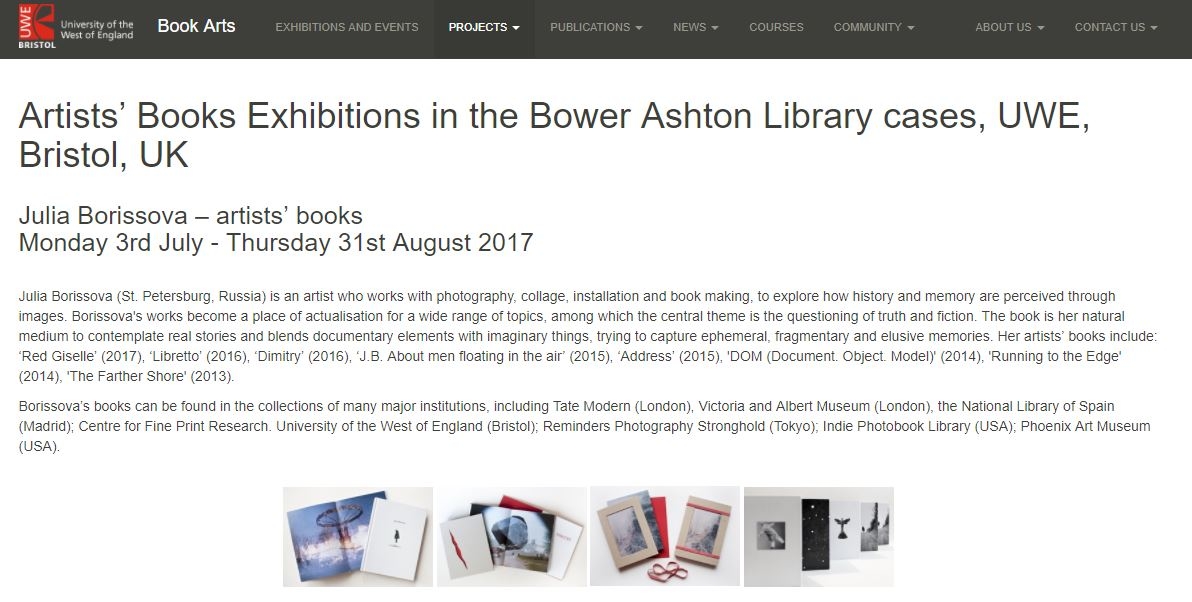 Alexey Bogolepov and Egor Rogalev: Trip to sculpture park «Conversation with the chaos»

On May 23′ 2017, as a part of Alexey Bogolepov‘s and Egor Rogalev’s project, shown during hosting the inhuman exhibition at The Moscow Museum of Modern Art, a field trip to the abandoned territory of the former scientific test site near St. Petersburg was held.

“A displaced subject saves us: it contains nothing touristic or pragmatically targeted. Thus the artist draws attention to the periphery, unnecessary and unobvious, sharing their experience and proposing the navigation and story without claiming the truth of the highest instance” – Aroundart says. 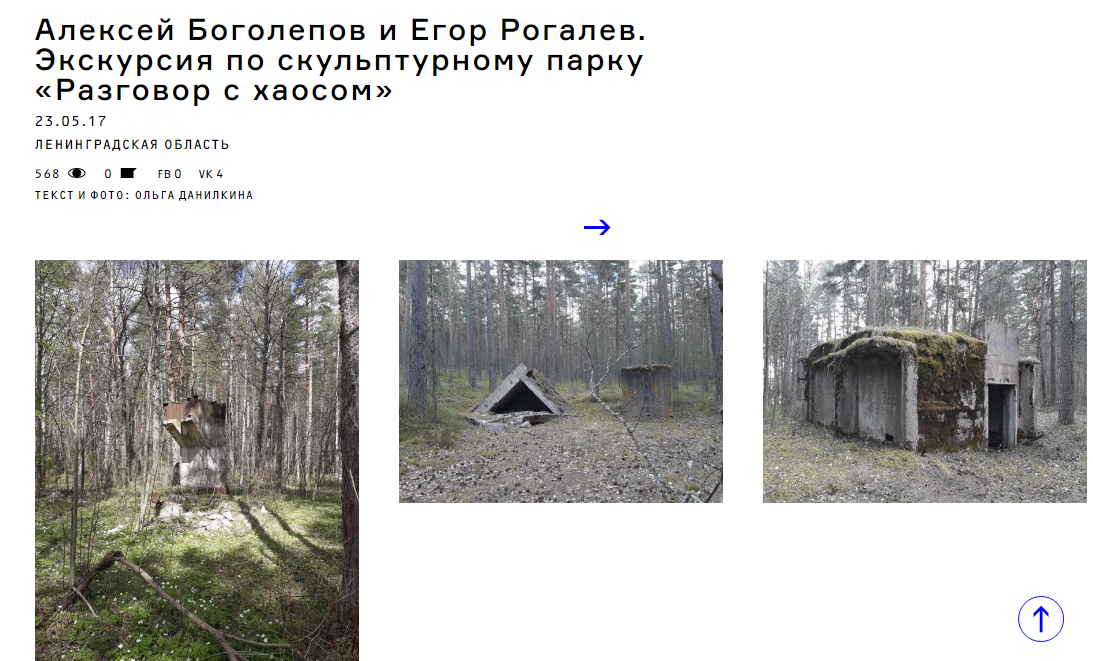 AMPLITUDE is a periodic project that presents current names and the forms in which contemporary photography exists in Russia today. AMPLITUDE also aims to explore the power of image in the format of book and print in the digital age.

See Amplitude’s page to find out more about its authors and projects. 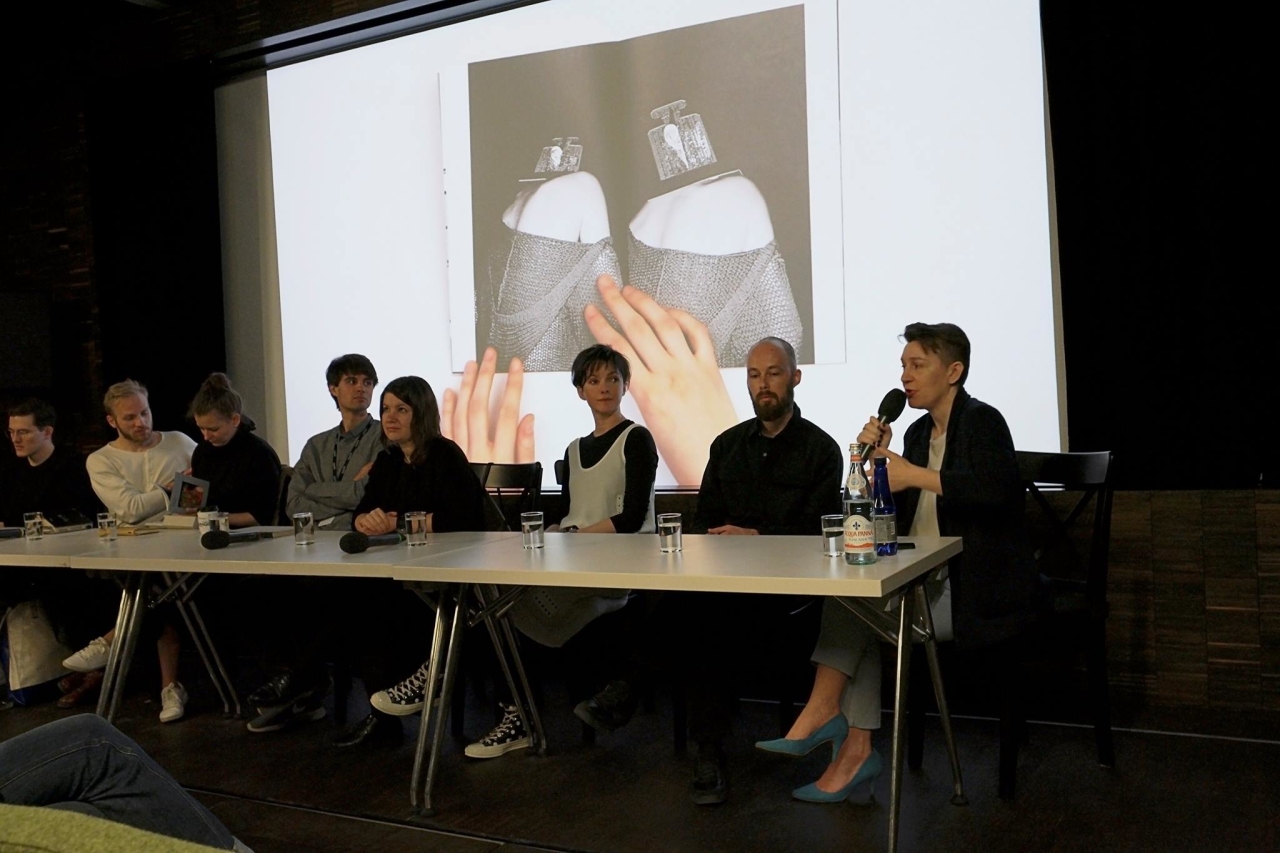 FotoDepartament at the Art Fair Suomi 2017

From 25 to 28 May FotoDepartament was taking part in the festival of contemporary art – Art Fair Suomi 2017 in Helsinki. 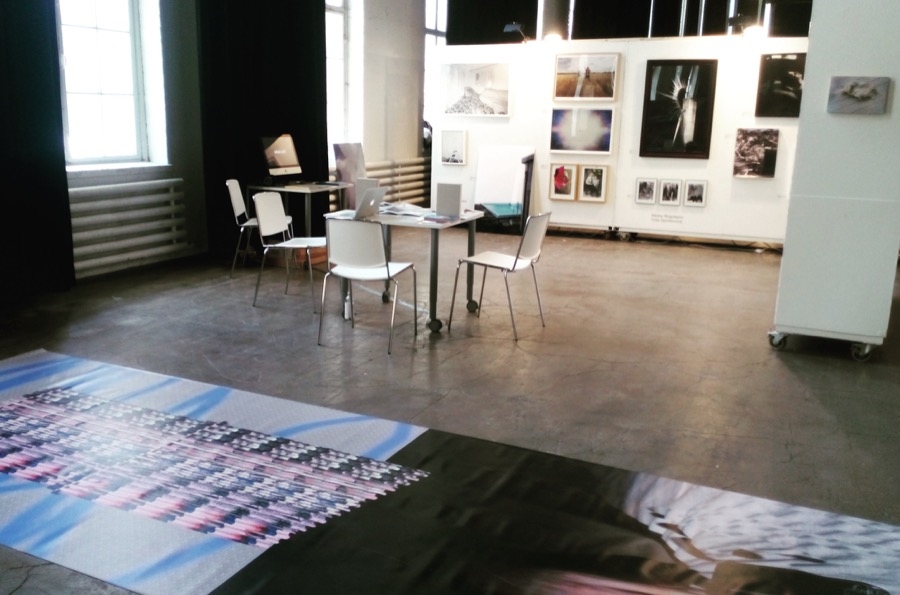 From 12 May to 18 June The Lumiere Brothers Center for Photography was holding an exhibition New Spread within the PHOTOBOOKFEST 2017 festival.

“New Spread exhibition is an attempt to explore the modern Russian photobook landscape and its heterogeneous structure. From simple and small photo zines to experimental and conceptual statements about the nature of photography and time, from small-circulation projects released independently to major publishing house solutions, from book dummies with threads sticking out of the cover to graceful objets d’art, from direct chronicles of public events to personal diaries with nonlinear narrative — the exposition at The Lumiere Brothers Center for Photography is designed to be an overview of the field, and at the same time it is a search for methods to display photobook to a wider audience” – Photobookfest’s website says. 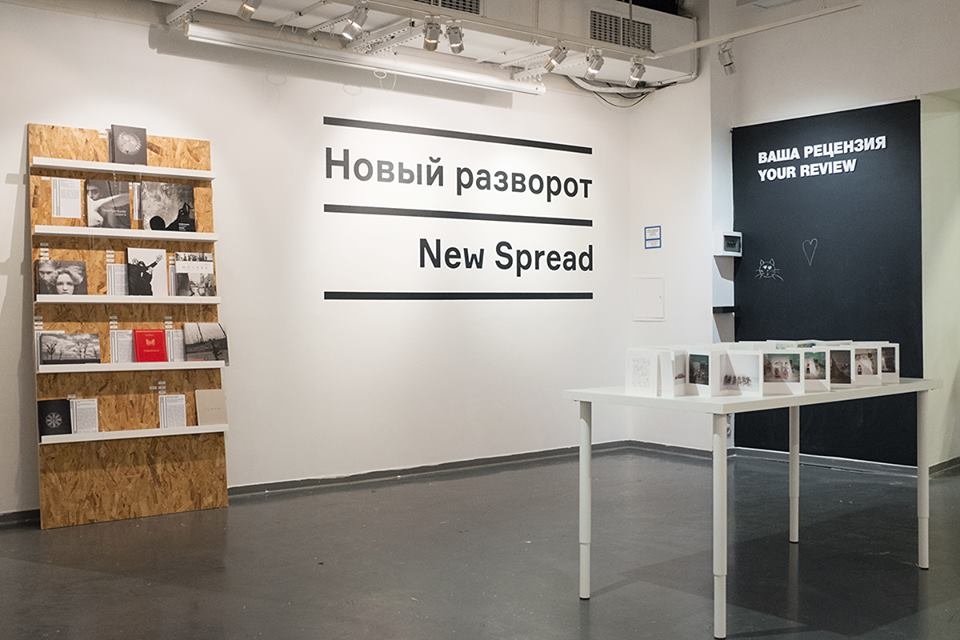 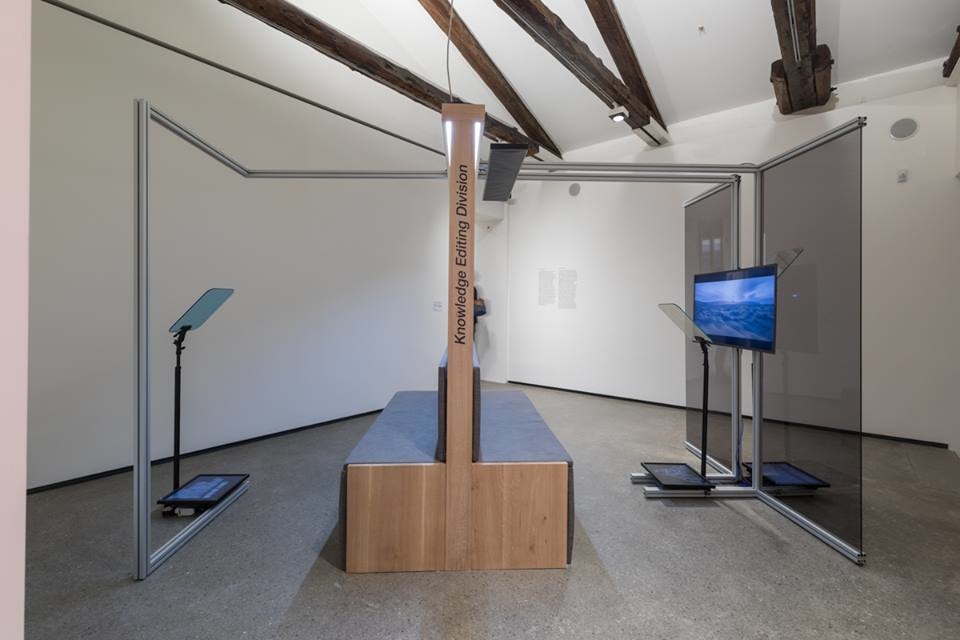 Elena Kholkina’s project at Voies Off 2017

Elena Kholkina‘s project “Time of the Moon” was participating in Screening Nights within Voies Off 2017 festival in Arles from 3 to 8 July. 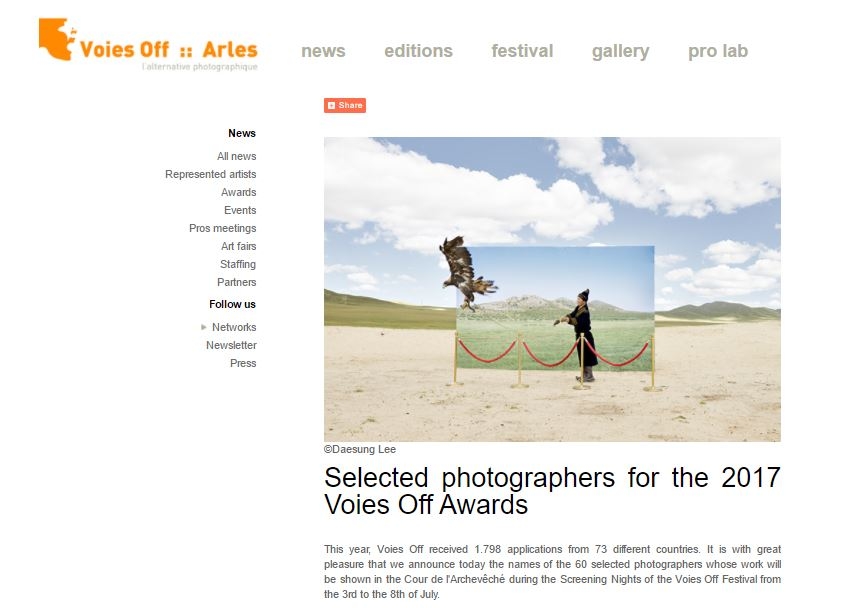 On May 16 an exhibition PhotoVogue / inPortraits, initiated by Vogue Italia in collaboration with Leica Camera Italia, was opened in Milan. It featured works by 10 artists, including MOJO images, photographers duo Victor Yuliev and Irina Yulieva.

Vogue Italia published MOJO images’ new project “In the sweat of thy face” – stage portraits of professional female football players. “Main idea of this series is theme of  gender stereotypes and interconnection between sexuality and feminism” – Vogue says.

In Helsinki, from June 9 to July 30, an exhibition dedicated to post-humanism in contemporary art – ANIMAL AND THE LOGIC OF OTHERS, was taking place. Among the various projects new works by Ksenia Yurkova, FotoDepartament.Gallery’s author, were exhibited. 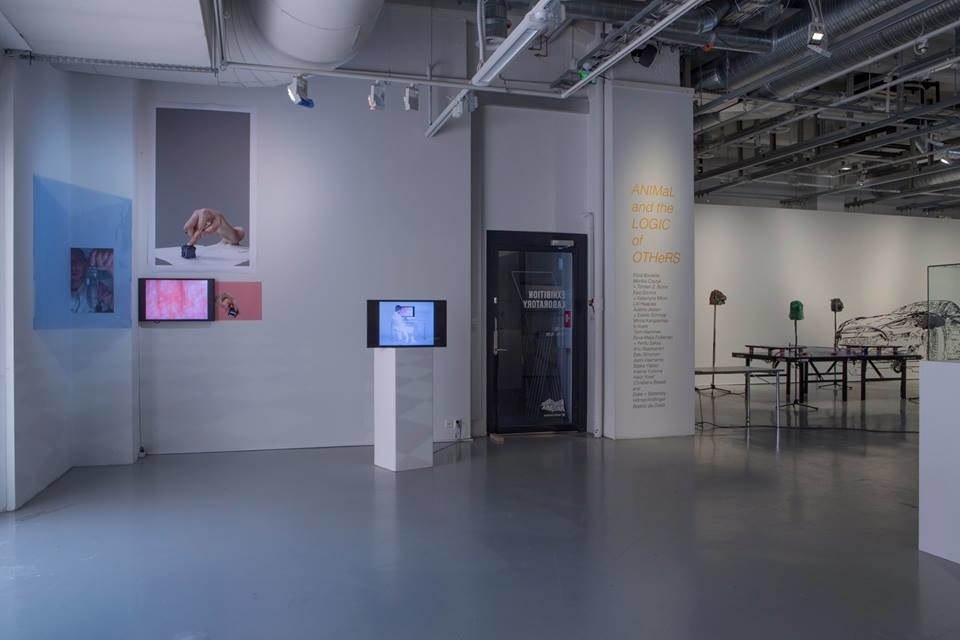 From 14 to 30 July, within the framework of the main programme of Athens Photo Festival 2017, Ksenia’s project Empty Expectations Vol.2 was presented.

Empty Expectations Vol.2 is a logical continuation of witnessing for the condition of the gradual destruction and transformation of the self-conception and personal relations, through the materiality of visual mediums. 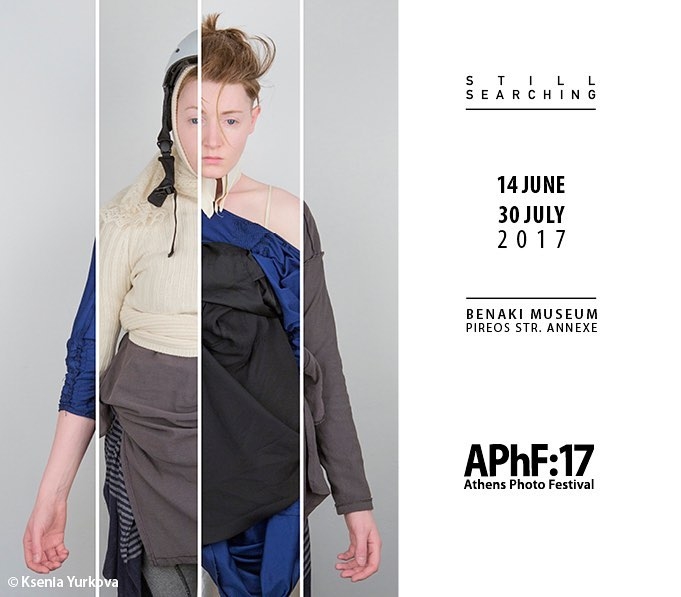 The project depicts the Chechen capital, or rather, nine different cities hidden inside: the inhabitants of Grozny – Chechens and a few Russians, the consequences of wars and the appearance of modern Grozny. 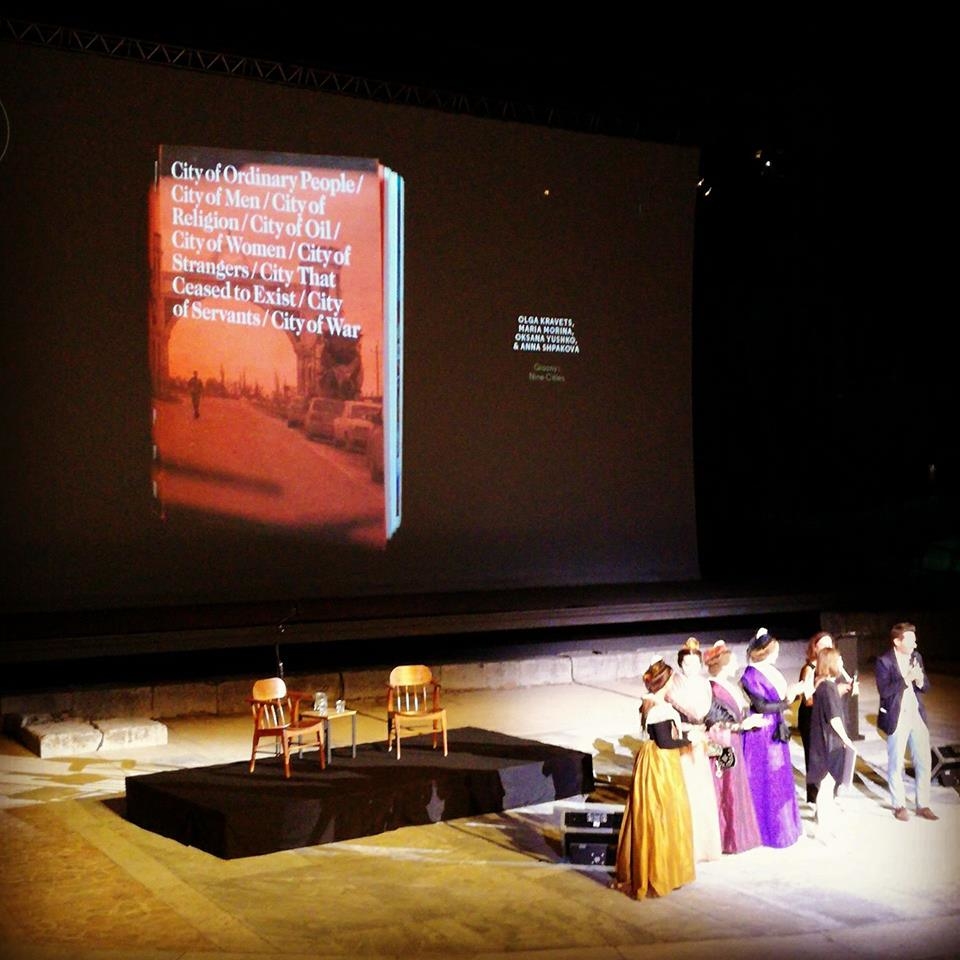 From 22 June to 6 July ‘2017 Metenkov’s House Museum in Ekateringurg was hosting a joint exhibition (summing up the results of the authors’ stay in art residence “New History of Ekaterinburg”) of Oksana Yushko and Arthur Bondar entitled “I want to believe”. When major part of Arthur’s research was dedicated to UFO witnesses stories, Oksana talked about faith in general: “in a big family, in good people and myself, in power of heart and mind, in miracles, hard working and finally in causal link.”

About the project, Ekaterinburg and peoples’ reaction to a word “faith” artists talked to online journal It’s My City

From 1 to 11 June during Copenhagen Photo City festival in the building of the former power station, Jana Romanova was presenting her two projects W and The Goddess Guide dedicated to contemporary ideas about femininity. 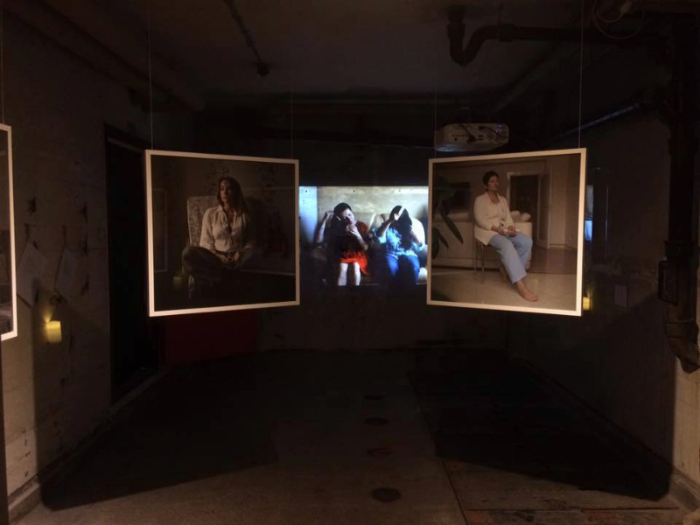 The exhibition “Experience of transition” is a one-day event of the works of eight authors who happened to meet on an intensive basis under Jana’s supervision. 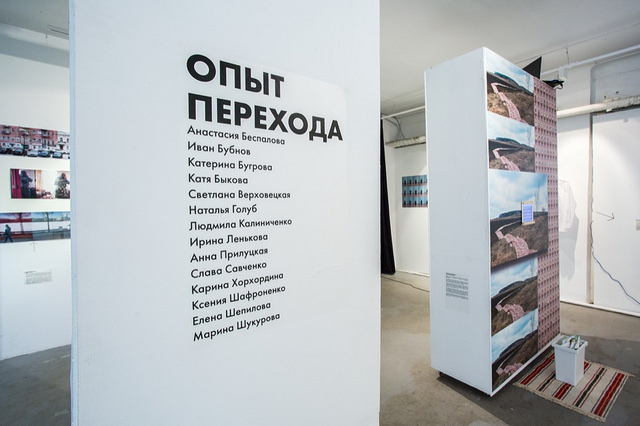 Jana’s book Shvilishvili became part of Photobook Phenomenon, perhaps, the largest exhibition devoted to photobooks which was taking place in Barcelona from March to the end of summer. Among curators there were Markus Schaden, Erik Kessels, Martin Parr and other major figures of photography scene. 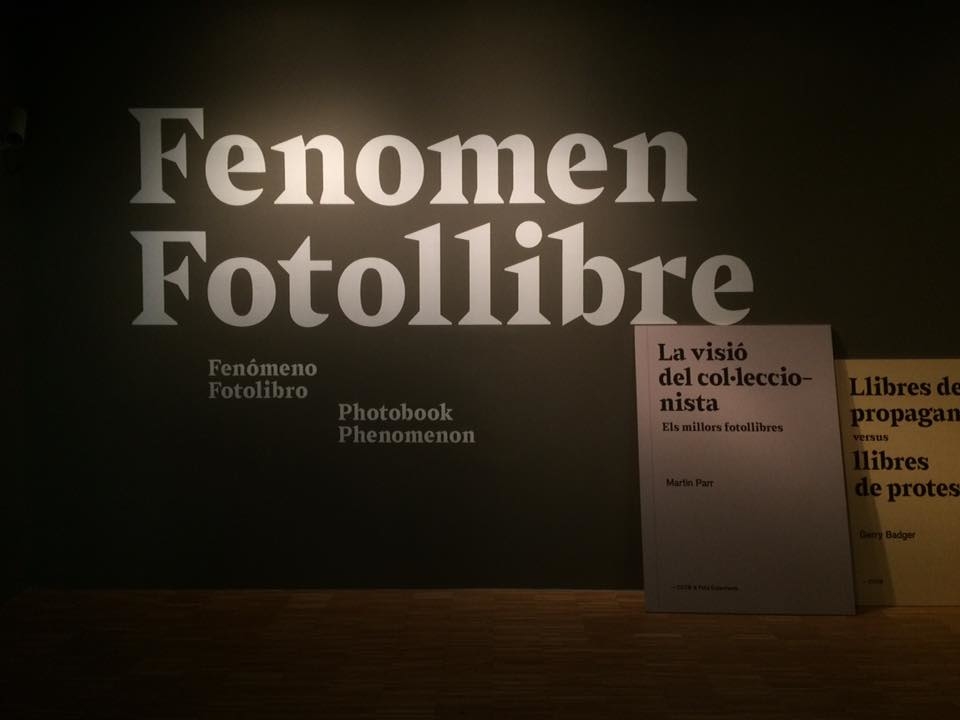 An exhibition: Relapse of the private. Personal story as a time stamp

National Center for Contemporary Arts in Moscow, from 8 to 22 August was hosting an exhibition Relapse of the private. Personal story as a time stamp which gathered 29 photobooks, published in a small edition in the 2010s. While open talks format within the parallel program was inviting a viewer to a dialogue: “Visitors are invited for expressing their views on how the private becomes public and why the language of photobooks is universal,” writes the NCCA. 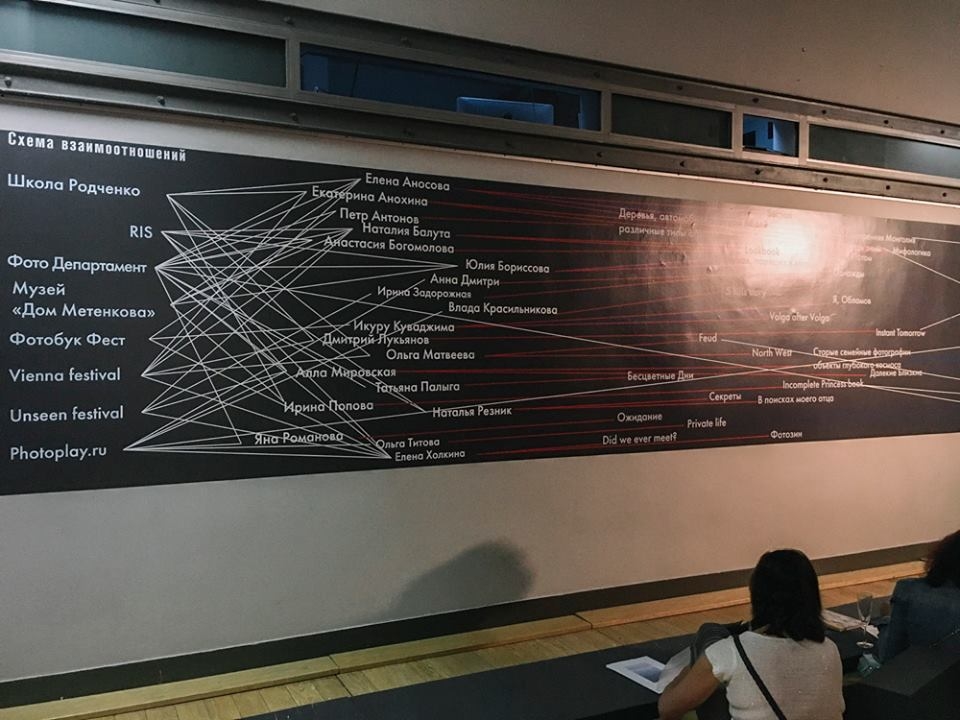 FotoDepartament Institute alumnies Elizaveta Dremova and Varvara Kuzmina won the nomination “Art Project” of the competition “Point on the map”, organized within Photoparade in Uglich.

Elizaveta took first place with her series “The cut rut“, documenting the consequences of a collective historical trauma, or rather, its displacement, on the example of Kolpashevo town, where in 1930 the political prisoners were locked.

Varvara became the second presenting “We sat here and belonged to each other” – photographical project about memory lines crossing points of physical space. 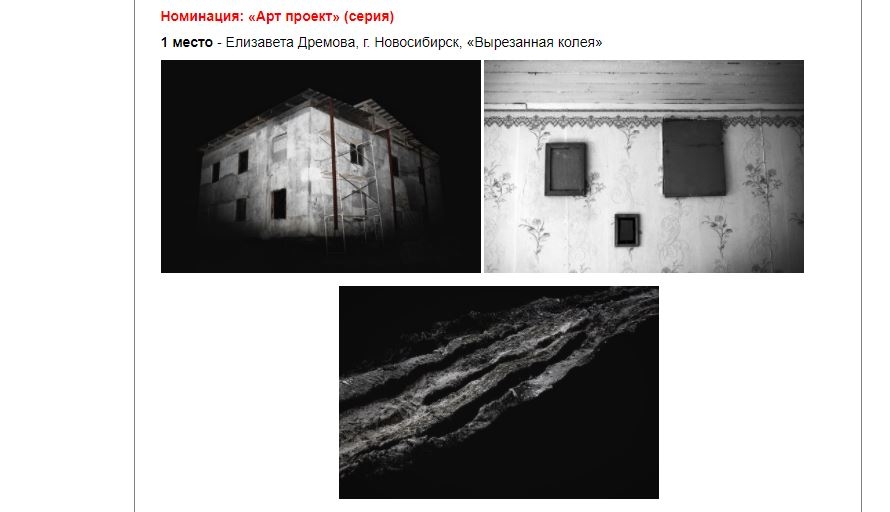